Cystitis is an inflammation of the bladder. In most cases this inflammation is caused by a bacterial infection and is considered an infection of the urinary tract. Cystitis most often occurs in women, due to anatomical differences. However, in middle-aged men, a swollen prostrate is the typical cause of urine retention, which can then cause an infection.

Approximately 20-40% of women get cystitis during their lives. Underlying causes include nutritional deficiencies and immune susceptibility, as well as often the more obvious irritations from intercourse, tight clothing, hot spices, coffee, tea, alcohol or high sugar in the urine. Food allergies may be a significant factor, especially in children. Medication, particularly drugs used for chemotherapy, can cause inflammation of the bladder. Also, long-term use of a catheter may cause inflammation of the bladder.

Symptoms of cystitis can be uncomfortable and unpleasant. Symptoms include pain or burning (before, during or after urination), cloudy urine that can be smelly, a strong urge to urinate which is difficult to resist, frequently passing small amounts of urine, and a discomfort or pressure in the lower pelvic area.

Cystitis is conventionally treated with antibiotics. However, cystitis can be treated successfully with homeopathy, although in some cases antibiotic treatment may be necessary. If this happens, homeopathic remedies can be used as well, and the need for prolonged antibiotic treatment may be reduced or eliminated. Repeated and prolonged use of antibiotics suppresses the immune system and there is a high risk of developing a resistance to antibiotics which might become a problem if antibiotics are needed in emergencies and more serious conditions. We need to remember that our body has an innate ability to heal itself, thus the correct homeopathic remedy  can easily tackle the discomfort and pain .

*Note: There can be other causes for these symptoms. The patient with more than one episode of acute cystitis must consult their GP as to fully investigate the urinary tract as a whole. Provided that serious disease has been excluded by the appropriate medical tests, homeopathic medicine may be more beneficial than some orthodox medical treatments.

Herbs for the urinary tract generally have diuretic effects, to flush out microorganisms and inflammation by-products. Many are also anti-microbial, either destroying microorganisms or stimulating the body to do so. Here are a few herbs that might be helpful to combat bladder infections:

Disclaimer: This article is for educational purposes only and not intended to replace the advice of your physician or health care provider. First aid situations may require medical or hospital care. Do not use this article as a means to diagnose a health condition. Speak to your doctor if you think that your condition may be serious, before discontinuing any medication that has been prescribed for you, or before starting any new treatment.

If you cannot decide which homeopathic remedy to select or if you have recurring or chronic cystitis, then please book an appointment for a full consultation with a professional homeopath.

NHS Bristol CCG is currently conducting a consultation on whether to stop funding for a number of services including homeopathy. Doctors who deliver these services were not formally notified that the consultation was taking place, and we, the homeopathic community, have only just been made aware of it. Consequently, there are only a few days to respond as the closing date is 15th August.


The points to make in your response are listed below, and you can help defend NHS homeopathy in Bristol by taking part in the consultation which can be found here(https://www.bristolccg.nhs.uk/get-involved/nhs-service-proposals/decommissioning-homeopathy/).

The recent news that homeopathy is to be removed from the NHS saving millions is very misleading. First of all it is not homeopathy it is homeopathy prescriptions, and secondly it will not save millions it will save around £90k. The media love a good headline – even if that means distorting the facts says Mani Norland, Principal of the School of Homeopathy, Stroud.

The reason given for removing homeopathy prescriptions from the NHS is a lack of evidence, but there is sound evidence of homeopathy’s effectiveness.

For example; by the end of 2014, 189 randomised controlled trials of homeopathy on 100 different medical conditions had been published in peer-reviewed journals. Of these, 104 were placebo-controlled and were therefore eligible for detailed review.

In addition, there have been six meta-analyses of homeopathy (large scale overviews of all previous research).

One meta-analysis was negative, concluding that homeopathy had no effect beyond placebo. Five were positive suggesting that there was evidence of an effect beyond placebo, but that more high quality research would be needed to reach definitive conclusions. The most recent of these studies, published in 2014, found that homeopathic medicines, when prescribed during individualised treatment, are 1.5-2.0 times more likely to have a beneficial effect than placebo.

With regards to the effectiveness of conventional medicine, things are not as clear cut as many people may believe. Every six months, the British Medical Journal (BMJ) publishes the scientific clinical evidence for treatments currently available on the NHS. This study found that of 3,000 commonly used NHS treatments 50% are of unknown effectiveness and only 11% are proven to be beneficial. See chart. 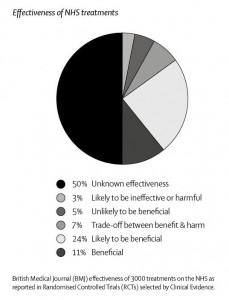 SSRI anti-depressants, such as Prozac, are an example of such a treatment. These have now been confirmed as being no more effective than placebo in the treatment of mild and moderate depression, yet in 2006 the NHS spent around £150 million on them.

The BMJ data clearly shows that the NHS funds many treatments for which the evidence of effectiveness is unclear - see chart.

Medical research is a costly and involved undertaking that is generally funded by large pharmaceutical companies, charities, trusts and governments. Millions of pounds are involved in drug development, which is usually recouped through licensing the drugs. As homeopathic medicines are derived from natural sources, they cannot be patented; without the financial returns that patents help to provide, it is more difficult to find companies willing to invest in homeopathic research. This is unfortunate, given that homeopathy has the potential to be a safe, effective and inexpensive complement to conventional health care.

Funding for research into other Complementary and Alternative Medicines has been steadily growing with promising results. Professor George Lewith (professor of Health Research at the University of South Hampton) and others have received Government funding for their work.

The Homeopathy Research Institute (HRI) is an international charity created to address the need for high quality scientific research in homeopathy. In collaboration with the Carstens Foundation, the HRI website provides a clinical research database that contains over 1015 studies, from randomised controlled trials to observational studies. It is the most comprehensive and academically rigorous database of its kind in the world.

In 2013 and 2015 the HRI held international conferences dedicated to research in homeopathy. Both events had around 40 speakers, including clinicians, PhDs and Professors from around the world.

The campaign to remove homeopathy prescriptions from the NHS has been instigated by a small lobby group lead by a well-known ‘sceptic’ of homeopathy. This group made a legal challenge to the Department of Health. Why are policy makers and health professionals allowing themselves to be influenced by a biased agenda-led lobby group? This is not being driven by clinicians, patient choice, research or economics. With 15% of the UK population (27% of Germans, 40% of French) using homeopathy - why is the demand not for more research into homeopathy, rather than less provision?

Read more online and look up the references at: www.homeopathyawareness.com

Homeopathy has been hitting the news in Australia this week.

Find out more about the NHMRC 2015 review on Homeopathy that's making headlines once again - have a read of the latest from the Homeopathy Research Institute here.

The report has had an impact across Australia and has been featured several times on 7 News across the country.

To watch the footage see below.

Rachel Roberts, Chief Executive of the Homeopathy Research Institute states 'It is interesting to hear the final sentence demonstrating the public position being taken by the pharmacists which is quite rightly in favour of patient choice “…pharmacists and their union say that that choice should be left with consumers".

Petrina Reichman, Secretary at the Australian Homeopathic Association says 'Freedom of choice is crucial. These products would not have survived on the shelves of pharmacies for as long as they have if they weren't effective, simple as that! Using complementary medicine also eases some of the emergency room burdens #yourhealthyourchoice' 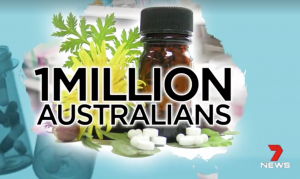 According to the Australian Homeopathic Association: ‘One million Australians use homeopathic products like those sold in chemists, as part of their daily healthcare'.

Your health, Your choice.

A trial has started in January 2017 to see if homeopathy can help in the treatment of osteosarcoma in dogs. Osteosarcoma is a very serious disease and the average survival time until euthanasia is about two months, unless amputation and chemotherapy are employed, when it is about eleven months. This trial is open to those who decide, in consultation with their vet, that amputation is not what they want for their dog.

The owners and dog will need to attend the trial centre for at least one consultation which might last up to 90 minutes. The consultations and medicine will be free.

The homeopathic remedies will be chosen specifically for the dog, based on the history and clinical signs. The dog will remain under the care of the primary vet, and if euthanasia is required, as always that decision will be taken by the owners and the primary vet. This is to ensure no additional suffering will be undergone by any dog participating in the trial.

If a dog is to be entered for the trial, the owner and vet need to complete the forms which can be downloaded from the Britsih Association of Homeopathic Veterinary Surgeons' website – bahvs.com.

If you have any questions or wish to enter your dog for the trial, contact the centre below. 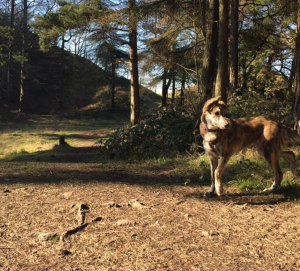 Geoff Johnson qualified as a veterinary surgeon in 1987, and subsequently qualified in veterinary homeopathy in 1999. He is the principal of a busy homeopathic veterinary surgery in West Somerset. He lectures frequently at home and abroad. He wrote the curriculum and taught the Danish Homeopathic Veterinary Diploma, which has just graduated nine vets. He is one of the few UK vets who treats animals diagnosed with cancer using homeopathy. He lectured conventional vets on this subject at the SW and London Vet Shows in 2014.

In his Somerset practice, Geoff has gained considerable experience of treating dogs presenting with a range of canine cancers using homeopathy. He has observed some dogs entering permanent remission with the disappearance of the tumour and health restored. Some dogs were palliated with improved vigour, lessening of clinical symptoms, and life extended beyond conventional expectations. Some dogs appeared to gain no benefit at all. He has specifically observed improvements in some dogs presenting with osteosarcoma. He has treated five such cases using solely homeopathy. None of these dogs underwent amputation nor received chemotherapy. Two died years later of old age, one was euthanased after 22 months and two were euthanased within three months. Three of the five dogs exceeded the mean survival times of dogs which received amputation and chemotherapy, although the dogs treated received only pain relief for a short period. Two of these three dogs went into complete remission. These anecdotal results suggest treatment from a homeopath might offer an effective adjunct to current conventional treatment.