Gill Graham writes... It is a question that I am often asked. How does homeopathy differ from conventional medicine? The answer to this is often very complex as homeopathy is not easily understood and has its roots firmly grounded in a fundamentally different paradigm. For those that wish to understand in greater depth, please see earlier 'Homeopathy News' blog posts on the homeopathic principles. However, for ease of understanding, the essence is as follows:

In short, the above highlights the main differences between treatment approaches. I am a strong believer in there is a time and a place for both systems of medicine, but where we can minimize potentially dangerous chemical drugs and their side effects, it is surely in our interests to do so. Despite the differences in approach, homeopathic and conventional treatments can work very well in tandem and be complementary after surgery, for example, to support recovery as well as in other medical situations. In an ideal world we would recognize that the integration of the holistic and the conventional has to be for the greater good.

To conclude, a homeopathic acronym which helps to describe the essence of homeopathic treatment and maybe one to help you remember!

Remedy- The totality of symptoms given as the simillimum in the homeopathic remedy.

Modalities -What makes it better or worse, what is characteristic to the patient?

YOU- Treatment unique and personalised to you, the patient.

As ever, consult a homeopath should you wish to commence treatment:  www.findahomeopath.org. 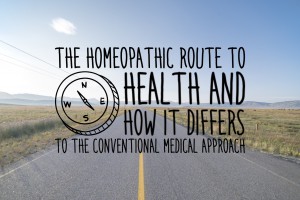 Homeopath Gill Graham discusses remedies to help the carer supporting others in our modern world, and the victims in traumatic circumstances.

It has been a long summer, where I had the privilege of taking the majority of August out of my regular working diary to go on holiday, concentrate on various upcoming projects, and reflect.

Much of this year has been taken up with horrendous humanitarian crises, most notably refugees, arriving homeless, devastated and bereft in various parts of Europe.  We cannot begin to understand their deep seated distress. Their traumas we cannot possibly identify with, hearts shattered and families broken. These are crimes inflicted by our fellow humans, many using their faith as a means of justifying unspeakable acts of terrorism, unimaginable in our civilised comfortable lives; witnessing the persistent, unremitting brutality of our fellow man. In addition, have any of us here, reading this ever been hungry, let alone starving? Have we ever been so thirsty we are forced to drink contaminated water or worse, give it to our children? Have we ever been without the most basic of clothes and human necessities? It is in the identification of these fundamental needs that we show our humanity and in our ability to actively help.

Many of my friends and colleagues are giving generously of their time and expertise to work in the camps in Calais and Dunkirk, feeling outraged at the lack of compassion and morality they are witnessing, but helping selflessly and unconditionally; ‘being there’ as much as they can, treating homeopathically, alongside conventional medics, and working in many other capacities, way beyond the normal remit of health professionals. Although I personally have not yet been, I and many of my peers have helped in other ways, through donations of clothes or money.  I remain full of admiration and pride for my friends who are physically able to be present to help.

It is in this spirit that this blog is written, to help those who spend much of their time devoting themselves to the needs of other people, and in the need to recognise that it is important to also care for oneself, on every level, emotionally, spiritually and physically.  Only in doing this are we capable of giving of our best in a healing capacity to others. For this reason, I have selected several homeopathic remedies that help to balance those who work in this sphere. Often feelings of exhaustion, disgust, indignation, inadequacy, total disillusionment, are experienced, together with abject fear, and permanent apprehension as to the future.

Several of the following remedies could apply to both the victims and the carers, in any situation that warrants healing.


The world is upside down. Gross injustices and wars are occurring, in front of our eyes. It is easy to feel depleted, helpless and inadequate. For those, be it homeopath, doctor, nurse or carer who help others who are suffering as a result of being directly involved in the atrocities, or in fact, following any trauma, it can be an exhausting, thankless task, often deeply affecting their own emotional health.

It is therefore not self indulgent for the ‘carer’ in whatever capacity to take time out to attend to their own health, through consultation with a homeopath. By being balanced, unsuppressed, having voiced anger and outrage at the frequently absent lack of humanity in this world, we are stronger; more capable of loving and dispersing our love and care, hopefully which will have a ripple effect, and that divine goodness overcomes insidious hatred. In the spirit of love and care, please help in any way you can.

As ever, consult a registered homeopath: www.findahomeopath.org

For more information about helping and supporting some of the people mentioned above, have a look at www.homeopathssupport.com. 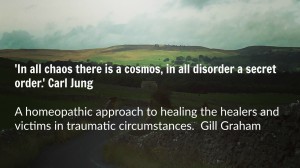 The homeopathic community and homeopathy course providers in the UK have worked together to create a series of interviews with experienced homeopathic practitioners. In these short videos they share details of previous careers and what led them to train as homeopaths, as well as what they love about the role they now do.

There are case examples given by the practitioners and they offer an insight into what it is like to work as a homeopath.

The videos are all accessible from the Homeopathy Course Providers Forum website. 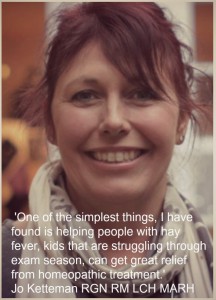 In a statement, the Royal College of Veterinary Surgeons said “… homeopathy is currently accepted by society and recognised by UK medicines legislation, and does not, in itself, cause harm to animals”. Before going on to say it could see no justification for banning veterinary surgeons from practising homeopathy.

In an age when antibiotic resistance is such an important issue, veterinary surgeons and farmers who have found they can limit the use of these drugs by using homeopathy should be applauded and not attacked.

Homeopaths are trained in how to recognise and advise the removal of what we refer to as ‘maintaining causes’ and ‘obstacles to cure.’ In simple terms, this means eliminating habits or changing elements of lifestyle that are clearly injurious to one’s health and will deter healing.

I am consistently shocked by people who complain about feeling unwell whilst not being able to recognise that often, their complaints are self inflicted.  Take for example the heavy smoker, who has a chronic cough or the person with a myriad of digestive issues, who insists on eating fast food most of the time.  These are obvious examples; others include people that are not even aware that their habits are causing distress to their body.  The patient who is underweight, with no energy and chronic health problems; on investigation, her diet consisted of nothing fresh, but all pre-packaged food with low nutritional value; her energy spent on looking after her young family, who unfortunately, also eat this diet. A result of this self neglect leads to the prescription of pharmaceutical medications, which can often exacerbate the condition in the long term, whilst possibly giving short term relief.  The sickness is therefore compounded and invariably some of these medications cause new illnesses, knows as ‘iatrogenic’ disease.  Hahnemann, in Aphorism 74 of The Organon of Medicine states: ‘Among chronic diseases, we must unfortunately include all those wide spread illnesses artificially created by allopathic treatments.’

So, the removal of what Hahnemann referred to as ‘causa occasionalis’ (maintaining causes) must surely make sense and pave the way for true healing to begin. Whatever medication, in whatever medical discipline, will not be fully effective until this is done. In Aphorism 77, Hahnemann states: ‘Diseases engendered by prolonged exposure to avoidable noxious influence should not be called chronic, they include diseases brought about by:


These self-inflicted disturbances go away on their own with improved living conditions if no chronic miasm is present, they cannot be called chronic diseases.’ There are several classifications of chronic disease (according to Hahnemann) which will be covered at a later date. Although the language here could possibly benefit from being updated, it is clear that the underlying message is to enjoy a healthy lifestyle suited to your unique constitution, which is balanced on every level.

What is important here is to recognise that through individualisation and the identification of circumstances peculiar to a patient, obstacles to cure can be removed; only then can true individualised homeopathic treatment begin.

The homeopathic approach, in its entirety is set out in Aphorism 3 of The Organon.

‘If the physician clearly perceives what has to be cured in disease, ie, in each individual case of disease (knowledge of the disease,) if he clearly perceives what it is in medicines, which heals, ie: in each individual medicine (knowledge of medicinal powers,) if he applies in accordance with well defined principles what is curative in medicines to what he has clearly recognised to be pathological in the patient so that cure follows, ie, if he knows in each particular case how to apply the remedy most appropriate to its character (selection of the remedy),  prepare it exactly as required and give it in the right amount (the correct dose,) and repeat the dose exactly when required ‘and lastly, if in each case he knows the obstacles to cure and how to remove them so recovery is permanent, then he knows how to treat thoroughly and efficaciously and is a true physician.’

As ever, professional homeopathic advice should be sought: http://www.findahomeopath.org/Search/Postcode