Here in the UK it's the first official day of spring and it's been wonderful over the past few weeks to see the daffodils and crocuses popping up on patches of land. In the woods, the new growth is coming through and it all made me think of our health. How we as homeopaths see that people regain health, and indeed even hope of recovery as they start to feel better. And also how it may have felt like winter for many with no hope or joy as chronic illness continued.

Working with people as a homeopath we often hear this and fortunately homeopathy can help many to start to feel better. The Bristol Homeopathic Hospital undertook one of the most comprehensive patient outcome surveys which was an analysis of over 23,000 outpatient consultations from November 1997 to October 2003. This represented over 6,500 individual patients whose outcome was recorded at follow-up. More than 70% of these follow-up patients recorded clinical improvement following homeopathic treatment.

Interestingly, many of the patients in the analysis had previously received mainstream medical intervention at the secondary care level and had either failed to respond satisfactorily or had been unable to tolerate the medication prescribed.

The conclusion here was that Homeopathy therefore may achieve positive clinical outcomes in certain conditions that have not yet been proven in RCTs, such as Crohn’s disease, depression, eczema, headache, and menopausal syndrome. Full details are given in the original article.


On the website here we've testimonials from people who've experienced help towards health through the use of homeopathy - and if you're someone who has also had benefit from homeopathic treatment then feel free to share your story here. 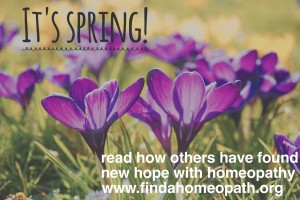 ‘By March, the worst of winter would be over.  The snow would thaw, the rivers begin to run and the world would wake itself up again.

Winter hung in there, like an invalid refusing to die.  Day after day the ice stayed hard, the world remained unfriendly and cold’ – Neil Gaiman

It may appear strange to have chosen the homeopathic treatment of depression in March, when spring is on our doorstep, with all the hope and beauty that brings, but contrary to popular belief, and according to the CDC, suicide rates peak in the spring. There are many reasons for this which will be discussed throughout this article. It is first necessary to define depression and analyse briefly the conventional approach to treatment. The Mayo Clinic describes it as such: ‘Depression is a mood disorder that causes a persistent feeling of sadness and loss of interest. Also called major depressive disorder or clinical depression, it affects how you feel, think and behave and can lead to a variety of emotional and physical problems. You may have trouble doing normal day-to-day activities, and sometimes you may feel as if life isn't worth living.’

Conventional Psychiatrists claim that it is a chemical imbalance, a serotonin deficiency.  However, after six decades, since intensive research into depression began, there is not one single conclusive study to support that depression is caused by an imbalance in the brain. Harvard Medical School state: ‘It is often said that depression comes from chemical imbalance in the brain; in fact, that figure of speech doesn’t capture how complex the disease is.’ They go on to say it could be from faulty mood regulators in the brain, genetic vulnerability, stress, medications or medical problems. This will be expanded on from a holistic point of view later in this article. Conventional treatment is by way of antidepressants.  At times, there is undeniable empirical evidence that they can work, although there is speculation currently that this is due to the placebo effect and the passage of time.  The adverse effects however cannot continue to be hidden and in patients taking Prozac, possibly the most common SSRI, (Selective Serotonin Reuptake Inhibitor) a host of side effects may be experienced;  including sexual dysfunction, dry mouth, nausea, headache, diarrhoea, nervousness, restlessness, agitation, increased sweating, weight gain, insomnia and drowsiness. A more serious symptom is ‘Serotonin Syndrome’ a condition in which too much of the mood elevator is present in the brain, can occur within minutes, producing high blood pressure, hyperthermia, high body temperature and an increased heart rate that can lead to shock. Serotonin Syndrome can arise when SSRIs act alone or in conjunction with other medications. Prozac is one of the few antidepressants approved for treating depression in adolescents but the drug has been linked to suicidal thoughts and behaviour.  Since this evidence has become clear and undeniable, the FDA, in 2007, enhanced its original public warning to a ‘black box’ warning, which is often only given before a product is withdrawn from the shelves and involves pharmaceutical drugs that are dangerous and life threatening, in this case particularly, but not exclusively, for young people. (https://www.drugwatch.com/prozac/)

Clearly, it is time to re-evaluate all we have learnt, look at things from a different perspective and to stop allowing vulnerable people to be treated with chemicals which can lead to death. Much of the advice that follows will help the patient to reclaim their own power with regards to their health in the realisation that a pill is not necessarily going to cure the problem, or by buying into the myth of the ‘chemical cure.’ As has been shown, there are long term risks to medications such as these (SSRI’s) and efficacy is challenged. Patients who are informed can do much for themselves and will no longer be coerced in to a route that is perhaps not necessary; this freedom is surely liberating and strengthening in itself.

So why are the suicide rates highest in the spring and not as winter falls and the chaos that the holiday’s often brings? Paradoxically, spring is a time when most people are excited about the prospect of warmer weather, more daylight hours, and generally aware of colour literally and figuratively coming back in to the earth.  A season of blossoming and growth, of new life; a time to plan for the rest of the year and witness the flourishing and slow but definite blooming of nature’s garden. March heralds the vernal equinox, this year March 19th, and the earliest in history. Spring, a time, I feel of great polarity; the birthing of all things; creation and resurrection are clearly key words associated with the season, and in the case of Christ and the Christian calendar, this was not done without unparalleled agony, hence the analogy to birth. A time to start again, thrive and allow new growth, expression and energy.

However, people who have a tendency to depression often feel under pressure as spring approaches, the lighter nights and longer hours of daylight somehow expose them; it is reverse SAD (Seasonal affective disorder) which is little discussed. They can no longer hide as easily inside, using the dark and cold as an excuse to be anti-social and hibernate; it magnifies their feelings of inadequacy.  The vibrancy of the burgeoning brightly coloured flowers and blossoms, and new tangible energies, small reminders of their own personal darkness; their condition is exacerbated. Anxiety creeps in, their differences magnified, they are forced to adapt and adjust to a new season, the temporary comfort of the winter blankets is disturbed.  Any disruption in depression is potentially dangerous.

Deep analysis as to the cause of this insidious mental illness is vital, aside from periodicity; the conventional school of thought was briefly discussed above but it is necessary to take this a step further and examine other possible influences. There is evidence unremittingly coming to light, that toxicity through GMO’s, herbicides, pesticides and food additives are strongly linked to mental illness.  By adapting a holistic approach, through modifying the diet to food that has not been adulterated with chemicals, and keeping it as simple and pure as possible, avoiding allergens detected through testing, taking natural supplements as required, adequate sleep and exercise and minimising exposure to toxins of every variety, we could go a long way to improving mental health issues  Also, lifestyle habits and physical illnesses should be taken into account, as they could easily be affecting the mental state, as discussed. Only in addressing the totality is healing possible and by removing ‘maintaining causes’ which will prevent healing, no matter what form of medicine is given. In addition, the homeopathic consultation would obviously take into account the entire set of presenting symptoms given by the patient to the homeopath; by doing this the correct constitutional remedy is prescribed and in conjunction with the above approach, could be greatly beneficial to the overall health of a person suffering from depression.

The following are a list of possible homeopathic remedies which could be indicated:


It also suits people who feel irritable, indifferent to family members, weary and depressed patients who always prefer to be in seclusion away from people.

There are numerous other remedies which could possibly be considered, however, the above covers many symptoms experienced by people in this state. As ever, a full case should be taken and the symptoms seen in their totality; consult a homeopath at www.findahomeopath.org

As an adjunct, it may be significant to mention that in 2007, Prince Charles advocated the use of homeopathy for several conditions, depression being one of them (also eczema and irritable bowel syndrome.)  He wrote to the then Health Secretary, Alan Johnson. Prince Charles wrote: "The only reason I persist in my efforts over integrated healthcare - despite waves of invective over the years from parts of the Medical and Scientific Establishments - is because I cannot bear people suffering unnecessarily when a complimentary approach could make a real difference."

He went on to suggest illness should be treated with a "whole person approach" rather than a "reductionist focus on the particular ailment. “I agree with Prince Charles.  Mental and emotional conditions, such as depression are complex, and no two people present in the same way; there is no individualisation, making conventional treatment a long shot, to say the least as the medications are designed to treat everyone. In addition, each medication carries with it a long list of undesirable, debilitating, side effects as has been shown. This is where homeopathy comes into its own. A remedy can cover symptoms on every level, ironically the more unique the symptom, the easier the remedy choice as it is a differentiating factor. Each case of depression is unique, therefore, treatment should be tailored to the individual.  There is a time and a place for conventional treatment through the use of SSRI’s, depending on the severity of the case; the initial integration of the above advice however, could be of great benefit to a patient and start a healing process which could reduce or eliminate dependency on prescription drugs.

I hope this advice has been of help and that you can circulate it amongst anyone you many feel would benefit.  I would love that March, with all its paradoxes proves to be a wonderful start to the spring for you and that some of the polarities discussed here become beautifully balanced.