‘Always aim at complete harmony of thought and word and deed. Always aim at purifying your thoughts and everything will be well.’  -Mahatma Gandhi.

Many of you will have spent January detoxing or abstaining from alcohol or rich food, or at least aware that that you should be more careful with your diet and lifestyle following any potential holiday excesses’.  So, if we see January as more of a physical body detox, then, all the historic evidence implies that February is perhaps a month for spiritual cleansing.

Here are the facts. The etymology of the word February suggests it is from the late 14th century and ultimately from the Latin februarius mensis, meaning, ‘month of purification’ Also, februare ‘to purify,’ and februa meaning ‘purifications, expiatory rites.’ (An expiatory right is like offering an olive branch, an outstretched hand, or the dove of peace etc.)  I see it as balancing the soul to be in harmony with the body, striving for complete homeostasis and state of being; the body having been cleansed, this is a time for an emotional, spiritual purification.

The Romans saw February as a month of purification.  Originally the Roman calendar only had 10 months. March being the first month, December the last.  January and February were eventually tagged onto the end of the year and seen as lifeless, almost boring months, so they used February as a month to atone for their sins. Herein lies the link to the word ‘februum’ which means purification.  Februus was the Roman God of purification.  The Romans, as many of us are aware had their own unique way of doing things, and saw making animal sacrifices in order to please their ancestors as a way of atoning; they would also pray. Purity was not all abounding however as February 13-15th heralded the pagan festival of Lupercalia, known for its wild orgies.  It involved much debauchery, nakedness and strange customs. This is probably not the place to discuss, but interesting we now have valentines on the 14th, with its almost polite quaint customs, by comparison. Valentines was first acknowledged in the 14th century at the time when Geoffrey Chaucer wrote poetically about courtly love and later in the 18th century the tradition of sending flowers and love notes to one’s beloved became common practice.  Again here, we see evidence of birth of a new start, or love.

Imbolc, or  Brigid’s Day to the ancient Celts, is an ancient  Midwinter Festival of Lights.  This special day occurs halfway between winter solstice and the spring equinox, generally February 2nd. Much of the Imbolc celebrations revolved around fire, which was sacred and involved bonfires being lit at sundown to burn away the ‘old year’ and make was for new growth, fertilizing the earth and inviting the rejuvenating, life giving power of the sun and new light. Women would invariably dress up in white robes, symbolizing purity and new beginnings. Early spring flowers were collected, candles lit; colour and light suddenly giving hope in the darkness, of a new dawn.

So, in a month when many are struggling with winter blues and feeling there is no end in sight to the darkness, have faith!  February symbolises the start of new vibrancy, where the sun and the light feature figuratively and symbolically. Should you need help in order to balance both your emotional and physical health, consult a homeopath at www.findahomeopath.org. You are unique, so are your symptoms.  Homeopathy strives to treat everyone as an individual, through in-depth consultation. Significantly still relevant today, words from the Ancient Greek Philosopher, Plato, embody fundamental homeopathic philosophy:

‘The cure of the part should not be attempted without treatment of the whole, and also no attempt should be made to cure the body without the soul, and therefore if the head or body are to be well, you must begin by curing the mind: that is the first thing … For this is the error of our day in the treatment of the human body, that physicians separate the soul from the body.’  (Plato, Chronicles) 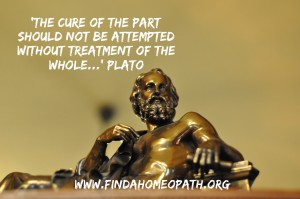