‘I drink because I wish to multiply my sufferings.’
― Fyodor Dostoyevsky, Crime and Punishment

‘There comes a time in every woman's life when the only thing that helps is a glass of champagne.’
― Bette Davis

The above quotes are symptomatic of many people views on alcohol and drinking and the paradox which ensues. Clearly, there are delights for some of us in the odd glass of champagne. However, moderation for some appears impossible and the chronic abuse of alcohol can become toxic in every sense.

Many parts of the world are now taking on an initiative based on England’s ‘Dry January’ which basically means encouraging people to abstain from alcohol for the entire month.  The aim is to raise awareness of the health benefits associated with going alcohol free and to stress the positive impact it could potentially have, both mentally and physically, for us all.

According to Alcohol Concern, drinking alcohol is a causal factor of over 60 illnesses and conditions, some of which include:

Alcohol seems to have become ‘normalised.’ It is very much part of our culture, (unless people abstain on religious and moral grounds) and many social events have alcohol involved. Without thinking, we congregate in pubs; invariably it would be rude not to take a bottle to a dinner party, we toast major celebrations often with bubbly of some description.  We are conditioned to accepting that we are different if we do not imbibe. Companies that sell alcohol have vibrant, buoyant marketing campaigns; we are bombarded with adverts encouraging us to drink to be cool and stylish, often targeted at the young who are often easily influenced. The negative and possible addictive effects are not advertised as strongly as they should be, apart from vague allusions to ‘drinking responsibly.’

The objective of dry January, I feel, is targeted at regular, possibly moderate to heavy drinkers who will notice a difference to their lives by eliminating alcohol, even if it is only for a month.  It is also possible that these drinkers will benefit in the long term by moderating or perhaps stopping their consumption altogether, once they are aware of the massive benefits, mentally and physically.

Many could find giving up alcohol a challenge.  For this reason, there are several homeopathic remedies that could help ease the cravings and calm the nervous system by helping to balance the body. For heavy drinkers and those who may be addicted, symptoms of withdrawal (both physical and mental) could include the following:

The following are list of homeopathic remedies that have an affinity to symptoms often related to alcohol withdrawal and associated problems. Only the keynotes are listed here as a guide. It is advisable to seek the advice of a professional homeopath, who can tailor a remedy to your own unique symptoms:  www.findahomeopath.org

Arsenicum - Overuse of alcohol. For people with chronic alcohol dependency. Nervous weakness accompanied by great tremulousness. Anxiety and compulsiveness, with nausea, vomiting, and diarrhoea. Indicated also where symptoms of anxiety accompany alcoholism (and sometimes misuse of drugs, legal or otherwise.)

Avena sativa - Indicated where delirium tremens, nervousness and sleeplessness are at the forefront of presenting symptoms. Also useful with other addictions (to help detoxify the body) such as such as cocaine, heroin and opium.

Capsicum – Helps to encourage a dislike for alcohol. Acts well on indolent people who are sedentary with a tendency to obesity. Perspiration and slow digestion, flatulence and intense desire for stimulants. Great thirst.

Hyoscyamus - Indicated also when delirium tremens occurs. Unremitting insomnia presents. Delirium is constant and loquacious. Pulse is fast and skin is cold and clammy and patient is tremulous and picks constantly at objects in the air. Frequent outburst of laughter alternating with weeping is a common symptom.

Lachesis -  Particularly effective for the female social alcoholic who often presents with a headache in the morning; sometimes she has visions of snakes and hideous objects. Loquaciousness a key symptom together with intolerance of tight clothing around the neck and waist.

Natrum Mur – A wonderful remedy used for those that abuse alcohol who also have long term chronic depression and grief issues.

Nux vomica-  Possibly the best known anti-alcoholic remedy. It covers presenting symptoms of irritability, nausea, vomiting, headache and tremors, following abuse of alcohol. Anger in a chronic state and constant desire for stimulants of any kind. It is a wonderful remedy to help reduce alcohol dependence.

Ranunculus bulbosus –Reputedly one of the best but little known remedies to treat acute alcoholism, particularly where panic and delirium are key presenting symptoms.

Stramonium – Suitable in habitual drunkards Where the patient presents with a bright red face and is experiencing hallucinations and looks and feels terrified. Often experiences visions of animals seeing him out and from which he is trying to escape.

Sulphuric acid –A great remedy for chronic alcoholism, often where the craving is brandy. (Also seen in those requiring sulphur, nux vomica and stramonium.) The stomach cannot tolerate the tiniest amount of food.

There are many more remedies which could be discussed, however, I stress that it is helpful to see the key presenting symptoms in their totality before prescribing, and a professional homeopath is trained in how to do this.

There are still however a fortunate few who can drink occasionally without addiction and subsequent alcoholism.  In these cases, drinking is not a cause for concern as it is minimal and obviously done for pleasure and the individual who drinks like this appears to be in control; a balance many of us could benefit from. However, In Britain and other countries, there is a growing trend to drink to get drunk.  This is becoming a serious problem and is taking its toll on our health service.  As well as the physical ramifications outlined, the psychological effects can be equally devastating and dangerous.

The benefits of taking time out in January, or whenever in fact, will allow you to listen to your body and nourish it with good food, exercise and lots of water. Your sleep patterns are likely to improve dramatically and generally you will feel less tired. Because of more sleep you will look better. Toxins in the alcohol make skin less elastic and this can be ageing. Liver function will improve as excessive drinking can cause inflammation potentially leading to cirrhosis. In addition, it is worth supplementing vitamins and minerals at this time if indicated. Generally, you will feel more vibrant and clear headed. You may discover new interests as you are not wasting time nursing a hangover. The possibilities are endless and the world is your oyster! 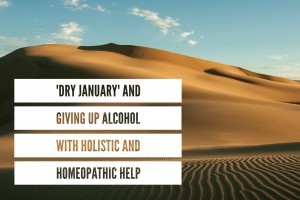 Homeopaths are trained in how to recognise and advise the removal of what we refer to as ‘maintaining causes’ and ‘obstacles to cure.’ In simple terms, this means eliminating habits or changing elements of lifestyle that are clearly injurious to one’s health and will deter healing.

I am consistently shocked by people who complain about feeling unwell whilst not being able to recognise that often, their complaints are self inflicted.  Take for example the heavy smoker, who has a chronic cough or the person with a myriad of digestive issues, who insists on eating fast food most of the time.  These are obvious examples; others include people that are not even aware that their habits are causing distress to their body.  The patient who is underweight, with no energy and chronic health problems; on investigation, her diet consisted of nothing fresh, but all pre-packaged food with low nutritional value; her energy spent on looking after her young family, who unfortunately, also eat this diet. A result of this self neglect leads to the prescription of pharmaceutical medications, which can often exacerbate the condition in the long term, whilst possibly giving short term relief.  The sickness is therefore compounded and invariably some of these medications cause new illnesses, knows as ‘iatrogenic’ disease.  Hahnemann, in Aphorism 74 of The Organon of Medicine states: ‘Among chronic diseases, we must unfortunately include all those wide spread illnesses artificially created by allopathic treatments.’

So, the removal of what Hahnemann referred to as ‘causa occasionalis’ (maintaining causes) must surely make sense and pave the way for true healing to begin. Whatever medication, in whatever medical discipline, will not be fully effective until this is done. In Aphorism 77, Hahnemann states: ‘Diseases engendered by prolonged exposure to avoidable noxious influence should not be called chronic, they include diseases brought about by:


These self-inflicted disturbances go away on their own with improved living conditions if no chronic miasm is present, they cannot be called chronic diseases.’ There are several classifications of chronic disease (according to Hahnemann) which will be covered at a later date. Although the language here could possibly benefit from being updated, it is clear that the underlying message is to enjoy a healthy lifestyle suited to your unique constitution, which is balanced on every level.

What is important here is to recognise that through individualisation and the identification of circumstances peculiar to a patient, obstacles to cure can be removed; only then can true individualised homeopathic treatment begin.

The homeopathic approach, in its entirety is set out in Aphorism 3 of The Organon.

‘If the physician clearly perceives what has to be cured in disease, ie, in each individual case of disease (knowledge of the disease,) if he clearly perceives what it is in medicines, which heals, ie: in each individual medicine (knowledge of medicinal powers,) if he applies in accordance with well defined principles what is curative in medicines to what he has clearly recognised to be pathological in the patient so that cure follows, ie, if he knows in each particular case how to apply the remedy most appropriate to its character (selection of the remedy),  prepare it exactly as required and give it in the right amount (the correct dose,) and repeat the dose exactly when required ‘and lastly, if in each case he knows the obstacles to cure and how to remove them so recovery is permanent, then he knows how to treat thoroughly and efficaciously and is a true physician.’

As ever, professional homeopathic advice should be sought: http://www.findahomeopath.org/Search/Postcode