In this series of blogs explaining the principles behind homeopathy as originally developed by Dr Samuel Hahnemann over 200 years ago, UK homeopath Gill Graham introduces the second principle:

The second principle of Classical homeopathy is The Single Remedy. Hahnemann was forceful in his opinion in prescribing with one remedy for the totality of symptoms, using words such as ‘it is inadmissible’ to prescribe more than one remedy at a time (Aphorism 273, The Organon)

The reasoning and thinking behind this lies in the fact that if many remedies were prescribed at once, it would be impossible to ascertain which remedy was actually working and could massively confuse a case. It is simple common sense when we consider that each remedy is ‘proved’ individually, the combined interaction of many remedies’ at once has not been. This obviously has many similarities to where a GP of conventional medicine, prescribes single drugs for single complaints, the interaction of all these drugs, collectively untested, at times, with devastating consequences. Why should homeopathy be any different, given the powerful effects of so many of the remedy’s.? It remains the case that there will always be one remedy that resonates with a case more than another; wherever possible, the homeopath should go with this.

However, as ever in life, there will always be grey areas and flexibility at times is necessary as long as a remedy is given sufficient time to act, and if there is a definite change in the presenting symptoms and aspect of the Vital Force.  In this instance Hahnemann, in the 4th edition of the Organon suggested that remedies could be alternated, given in short succession, and condones the use of tissue salts, in specific cases that demanded a different approach.

Catherine Coulter, in ‘The unfolding of Experience’ sums up the ideal situation in prescribing, by stating that: ‘the strongest, deepest current in classical homeopathy – the tug that pulls the stream to the river and the river to the sea- is to address the multiple manifestations of the single disordered life-force with a single remedy; in a phrase, to shape unity from multiplicity.’ It remains the case that if this pure, philosophically appropriate method of prescribing can be attained and in whilst doing so, promotes healing without other remedies being involved, we have demonstrated the dynamic power of pure, classical homeopathy. 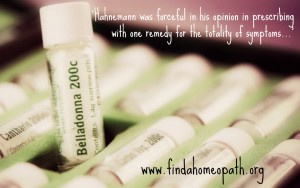